To say I was anxious about the whole thing was probably an understatement. I was a nervous mess and my nervous-panicky-self led me to make a few crass decisions I regretted later on but hey, there was a first time for everything. I know they were all something I could learn from and probably look back with a laugh later on (narrator voice: it wasn’t funny).

Anyway, here is the first highlight of my four-day trip!

I spent my first day roaming around Taman Mini Indonesia Indah (“Beautiful Indonesia Miniature Park”) with my lovely friend Ve. It’s a huge park that encapsulates all aspects of Indonesia’s culture, from museums to replica houses to theaters — you name it. It strongly reminded me of the now-defunct Nayong Pilipino, Manila’s very own miniature park that showcased replicas of the Philippines’ most popular scenic attractions. I was hit with a strange wave of nostalgia from the get-go.

A little backstory: when I was still crafting my itinerary, I asked my Indonesian friends on where I should go in Jakarta, and this was a popular response I received. However, I kept butchering its name: I kept saying “Taman Mani” instead of Mini, and it was funny because “mani” literally translates to semen in Bahasa Indonesia. Amazing, right? The more you know.

We went to the pavilion of replica traditional houses first. To my amazement, I learned that each house design represents a specific province/region in Indonesia, which only shows how wonderfully diverse the country is. 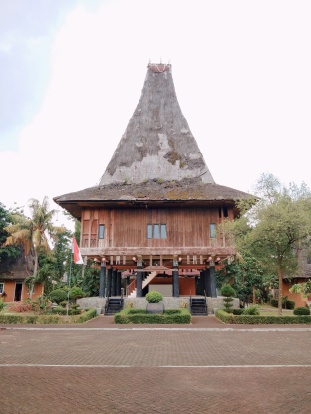 A traditional house from Sumatra

Despite coming from different places, the houses shared several similarities: all are made of wood, built on stilts, have stairs, covered by a vernacular roof, and adorned with intricate decorations. If anything, the only difference they have is their design, but all are beautiful in their own right. 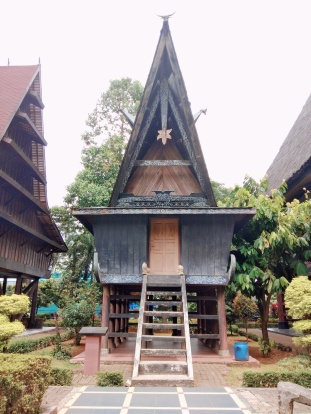 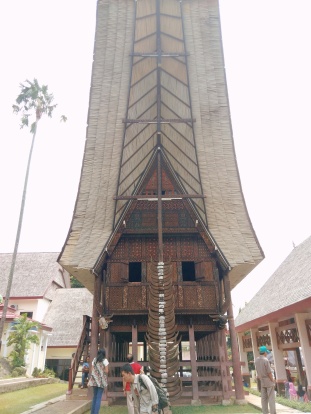 Some houses have roofs that extend really high.

Not gonna lie, I’d probably host regular dinner parties and sleepovers all the time if I had a house as beautiful as this, haha!

Our next stop was at the Komodo Indonesian Fauna Museum and Reptile Park, which pretty much speaks for itself. Pictured above are two Komodo dragons, giant lizards native to the country. (Un)fortunately, there was no real Komodo dragon in the park, but we saw real-life replicas, along with other reptiles.

I had mixed feelings for these reptiles because while they were cute and beautiful (the duality!), I also felt sorry for them for having to live in such an enclosed space instead of roaming around as they please in their natural habitat 😦

With fatigue and heat taking over us quickly, Ve and I decided to take a break for lunch first. I had Nasi Goreng and Teh Tarik. The Nasi Goreng was amazing — it’s rice stir-fried to savory perfection combined with tender chicken chunks and chilis — and the serving could be good for two, even though it was sold at such a cheap price.

Here’s a sad discovery though: Indonesian food is too spicy for my tongue. I was practically starving when I ate this meal, but sadly, I couldn’t bear to finish it. The milk in my teh tarik helped wash away the spiciness somehow, but it wasn’t enough.

One of the primary reasons why I flew all the way to Indonesia is because of their cuisine so you could imagine how disappointed I was when I found out that my taste buds are too weak for their normal chilis.

The pavilion of traditional houses. 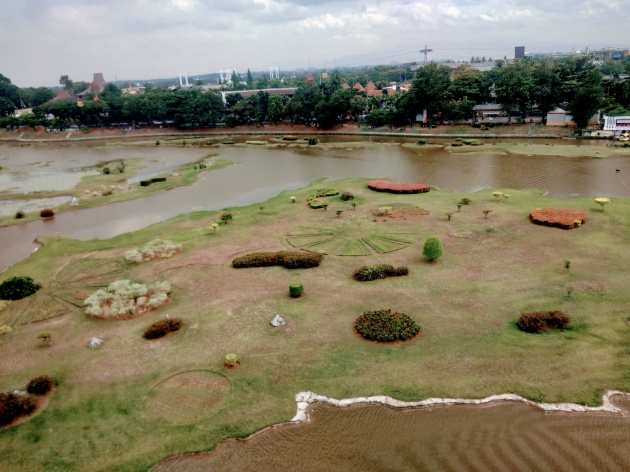 The miniature archipelago of Indonesia, as seen from above.

After lunch, we hopped on a cable car that took us from point-to-point of TMII. I’m no stranger to ungodly tropical weather, but the ride was a nice reprieve from the sweltering heat of Jakarta no matter how brief it was. Plus, Ve and I got the chance to take a few selfies while jamming to EXO’s Diamond and cursing every time the car ‘bumped’, haha.

Girl, I was so glad we rode that cable car because otherwise, we probably wouldn’t have caught glimpse of this beautiful building from above. This building is Museum Indonesia, an anthropology and ethnological museum that exhibits several Indonesian art forms, traditional clothing, and replicas of living spaces to name a few.

This was my favorite among all the attractions we’ve gone to. It made me learn so much about Indonesia as a whole, including similarities it has with the Philippines. This is just surface level, but both countries have sarongs, play sungka (it’s called “congkak” in Bahasa Indonesia), and even have similar (if not exactly the same) indigenous musical instruments. That’s on top of the words that our native language share.

Somehow, so much of it resonated with me and I felt at home even though I was in a country that was technically a thousand nautical miles away from home.

That aside, the building in itself was really too stunning. It’s built in Balinese architecture, which had strong Hindu influence as you can see from the few decorative elements of guardian statues carved at the entrance.

A replica of the National Monument of Indonesia, a symbol of the country’s fight for independence. 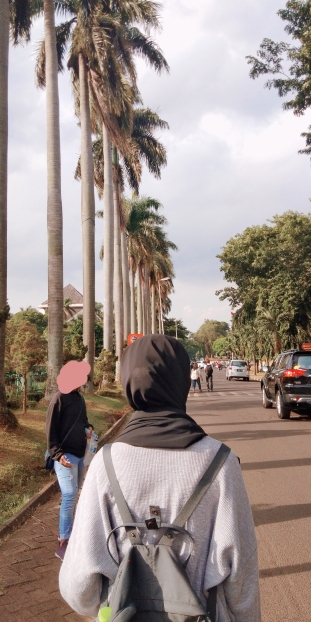 We ended our day trip by resting for a bit at the Merdeka Square replica (it was hot, okay). There were plenty of kids and their mothers just lounging around, and once again I was reminded of the open spaces of plazas back home. While walking, we passed by a huge wedding hall. A few kilometers away, there was also a rock music festival ongoing. The whole place was just so lively and full of music.

Overall, Taman Mini is a wonderful place to start at if you want to learn about Indonesia. One day wasn’t enough to visit each attraction of this 250-acre miniature park, but it’s definitely worth a visit. Just don’t forget to bring a bottle of water, a fan, and prepare yourself for lots of walking.

Angie is a 25-year old writer from Manila. Outside of writing, she likes fussing over penguins, discovering new places to eat at, and crying over Greek mythology.

sorry georgie, but i did it first 💁 from the great depression, we have now moved on to the great recession! charot. thankful for the gift of good health, family, friends, work, and skinny ass white twinks despite everything that's happening lately. as dame kristin scott thomas has lovingly pointed out in fleabag season 2, "people are all we have." may you all stay safe & healthy until all of this blows over. thank you for the birthday wishes. i'm glad to be alive today 💜
I always hyperfixate on things. May it be celebrities, movies, or a new tv series, I always need 𝘀𝗼𝗺𝗲𝘁𝗵𝗶𝗻𝗴 to obsess over with or I would literally lose my mind. It's how I'm just wired. It's my coping mechanism vs. depressive episodes — if I'm busy thinking about some other person or an alternate universe, I won't have to think too much about my life. It's not the healthiest way to deal with mental illness I know, but it's cheaper and more accessible than therapy (please don't be like me and still go to therapy if you need to). . . . January feels like a whole depressive episode so far (I welcomed the new year in a Tommy Shelby kinda state of mind) but that won't stop me from going back into hobbies I promised myself I would pick up again, and that includes reading. It's actually funny and amazing how a simple story could easily boost your serotonin up. I'm currently reading Rainbow Rowell's #CarryOn while listening to Disney classic instrumentals, and it's the most magical I felt in a while. This book somehow feels like reading Harry Potter all over again, except more queer-inclusive (sorry JK Rowling but this is how it's done). #booklangclub
that's what she said
saturdays are for gays & coffee. charot
We celebrate our LGBTQIA+ friends, we laugh at their jokes, we benefit from their culture, but a very few of us bother to know their struggles that they continue to fight for 'til today. . . . We've come a long way from the years when loving someone of the same gender was still largely considered a crime, but fighting for our rights is a continuous fight. #Pride is not just a celebration, it is a FIGHT. It's a fight for our EQUAL rights, it's a fight to be accepted COMPLETELY by the society, it's a fight to be able to love whoever we want to love without fear. . . . I marched not just because I wanted to, I marched because I knew I needed to. I marched because I wanted to push for a world where safe spaces for my brother and other members of the LGBTQIA+ community would no longer need to be few and far in between, but be the very world that we live in. I marched because I wanted the world to know that we exist, that we're VISIBLE, and the society's homophobic asses can fuck off. . . . Pride is solidarity in action. Pride is protest. #ResistTogether @mmprideorg
tassel goals
%d bloggers like this: